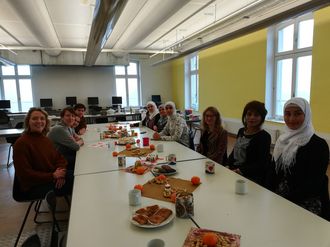 In short presentations, the participants of the PropädeutikumPLUS B2 course presented topics such as the Arabic language, their hometown or festivals and customs and were able to show what they had already learned in the winter semester 2019/2020. Over Christmas pastries and Algerian and Syrian delicacies, they joined the teachers in a festive atmosphere to bring the course to a close before the winter break. The presentations provided material for exciting conversations and intercultural exchange. 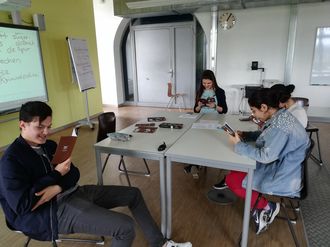 What happened on board the luxury yacht? Why are there traces of blood on deck? And who has Elena Huber on his conscience? Everyone in Max Huber's clique, which came together for a yacht trip, would have had a motive... But who is innocent and who is the possible perpetrator are the questions to be answered in the mystery game "Murder overboard".

The participants of the PropädeutikumPLUS course C1.1 from the summer semester 2019 slipped into the role of the respective characters and played over three rounds of the game not themselves, but for example the old school friend or the brother-in-law of the victim. The players interrogated each other, meticulously reconstructed the evening of the crime and, on top of that, brought many a dark secret from their shared past to light. With the help of the ever-changing evidence and the razor-sharp wits of all the players, they finally succeeded in convicting the murderer. The conclusion of the amateur detectives: "The joint puzzles were a lot of fun. We are already looking forward to the next mystery game! 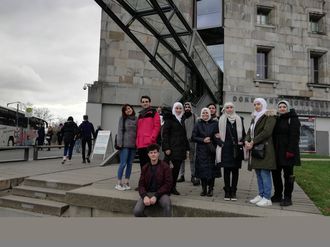 During a bus tour around the former Rally Grounds of the Documentation Center in Nuremberg, the participants of the PropädeutikumPLUS course B2 from the winter semester 2019/2020 learned more in a very vivid way about a chapter of German history that otherwise only finds a place in the margins of the classroom - but which is just as much a part of regional studies. In addition to the buildings, film footage from the 1930s illustrated how architecture and staging were misused for propaganda purposes. A subsequent question and answer session offered the opportunity to deepen the impressions and to classify them historically.

The next item on the programme also focused on experienced regional studies: at Nuremberg's world-famous Christkindlesmarkt, the participants discovered all the Christmas traditions - from gingerbread and children's punch to nativity scenes and Christmas decorations to Christmas music. During the subsequent walk up to the Kaiserburg, Nuremberg once again showed its historical side - and thrilled with a breathtaking view: "The view over the illuminated city is the highlight of our excursion," was the unanimous verdict. But Nuremberg has even more to offer: The participants were happy to be able to enjoy authentic food from their Syrian homeland and let the day come to a cosy end with shawarma and koba.